The small group of women who envisioned greater access to reproductive health care and unbiased, informative planning in 1989 knew something had to be done in our community. We were too small and rural to warrant a Planned Parenthood clinic – and many of those residents truly in need of services didn’t have the ability to travel to gain access to those services.

Education was an immediate need.  At Silver Springs High School (the county school with programs for young mothers), the school nurse reported that the overwhelming consensus among students was that getting pregnant was desirable, because they would receive more welfare money.  These young mothers didn’t envision a choice for themselves – either in their reproductive health or their lives.

Nevada County was overwhelmingly conservative in 1989.  The LivingWell clinic, an anti-abortion advocate, had opened its doors in 1986, its intention to influence and coerce young pregnant women to consider only full-term pregnancy as an option. No organization existed to provide medically accurate, truthful, complete education and options to those in need.

Women from The American Association of University Women (ww.aauwnevadacounty.org), Business & Professional Women of Nevada County (bpwnevadacounty.org), and the League of Women Voters (www.lwvwnc.org) formed an alliance to provide education about reproductive choice.  They decided their first priority was to begin encouraging public dialogue. 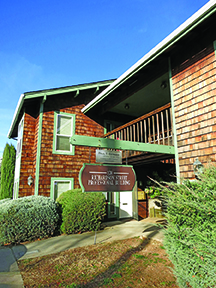 Armed with pamphlets and medically accurate information from pro-choice organizations outside Nevada County, these women held their first public information seminar. They were thrilled when a deluge of attendees arrived. The excitement was short-lived, however, when they discovered the attendees were present only to prevent the presentation from taking place and to remove the entire supply of educational pamphlets. They decided to reorganize and become better prepared for future presentations.

These early founders were astounded that there was an organized effort to suppress facts about pregnancy and abortion.  They were accused of being pro-abortion. In fact, just like today, no one was advocating that young women rush to have abortions the moment they discovered they were pregnant. What they did advocate for was education and empowerment – based on unbiased, informative family planning and access to reproductive health care.  This alliance of women strongly felt that choice – the choice to have children or not – and when – is an absolute right for all people.

The ensuing years brought change – but it was slow and often discouraging. Citizens for Choice became an independent organization in 1992.  Its founders dreamed of providing a clinic for Nevada County, but felt it might never come to fruition.

Were it not for the dedication, courage and hard work of the women who met 25 years ago with a shared vision of supporting reproductive choice, we would not now be celebrating this milestone anniversary.

Today, Citizens for Choice is a member organization of the California Coalition for Reproductive Freedom (CCRF), a statewide reproductive and sexual health, rights, and justice coalition of more than 30 independent organizations. We are partners with Women’s Health Specialists for The Clinic!, our reproductive health care clinic in Grass Valley, which was opened in 2006. We provide education through our ‘Know it and Own it’ program.  Our advocate partner, C.H.O.I.C.E.S., promotes reproductive justice and education at Sierra College.

Join us in celebrating our 25th Anniversary! A ‘Decadent Desserts’ fundraiser is planned for Thursday, November 20th, 2014 from 6:00 – 8:00 p.m. at the Historic Powell House in Nevada City.  Have you been craving the luscious taste of Chocolate Grand Marnier cake? Give in to your desires! Your senses will be soothed by voluptuous desserts baked lovingly by Upper Crust Bakery in Chico; your ears caressed by the soulful music of Aedryan Gantt. You will be supporting a great organization with your modest donation (suggested $25 in honor of 25 years of service).

RSVP via e-mail at info@citizensforchoice.org and honor the commitment and vision of Citizens for Choice and the difference we make in our community.

This short, 10-minute film is powerful. ‘Honoring Courage: A Short History of Reproductive Health Services in California’ details the fight in the 1960s and 1970s to legalize abortion and curtail forced sterilization and takes viewers to current efforts to secure reproductive rights and justice.

This story has never before been documented on film.

Produced by CCRWF and Storefront Political Media, we were honored to work with our Advisory Committee: Black Women for Wellness, California Latinas for Reproductive Justice, NARAL Pro-Choice California, and Planned Parenthood Affiliates of California, as well as the many leaders who agreed to be interviewed and filmed.