You are here: Home / Articles

“I have met thousands and thousands of pro-choice men and women. I have never met anyone who is pro-abortion.”

How timely Hillary’s quote is, considering that last fall, the San Francisco City Board of Supervisors voted to pass an ordinance prohibiting crisis pregnancy centers from engaging in misleading advertising.  One of the most common false statements issued from crisis pregnancy centers is that Planned  Parenthood, or groups such as Citizens for Choice, are ‘pro-abortion’.

Crisis pregnancy centers, according to the ordinance, routinely advertise that they offer comprehensive pregnancy services, including those for pre and post abortion counseling. The implication is that they provide education to clients about all choices available to them.  In fact, many crisis pregnancy centers fail to inform that they don’t actually offer any abortion services or referrals to abortion providers, until such time as the client is in their clinic undergoing ‘counseling’.   It is this type of omission that is the basis for the claim that centers mislead through false advertising.

The United States District Court for Northern California will be hearing a case in which First Resort, Inc. a ‘Crisis Pregnancy Center’, has filed a lawsuit claiming that the recently passed ordinance is a violation of their right to free speech.

The court typically takes a dim view of misleading advertising, including false claims.  Expressing an opinion, or viewpoint, is a constitutional right enjoyed by each of us, and is protected by the First Amendment.  Whether or not one is pro-choice or deeply opposed to abortion is a personal decision.

What should not be protected by the First Amendment are false claims, especially those that purport ‘scientific proof’ of an opinion.  Some egregious examples of claims and actions made by Crisis Pregnancy Centers:

First Amendment rights must always be protected.  However, abuse of facts while attempting to hide behind constitutional law should never be tolerated in a civilized society.  Many religious – based ‘pregnancy centers’ use the term ‘moral obligation’.  In what way is it ‘moral’ to make up false statements and call them facts?  In my experience, that is called lying.

We will be closely following this case in the United States District Court, and will update our readers as we get more information.

Frederika Zylstra is a professional copywriter with The Written Word Professional Copywriting, and is the Word Wizard for Wild Women for Business.  One of her many hats is writing blogs for business and non-profits.

“No woman can call herself free who does not control her own body.”

Margaret Sanger, who is considered the ‘founding mother’ of Planned Parenthood, understood this concept decades ago.  In the intervening years between her statement (somewhere around 1924) and now, much has changed for women.  But, is it enough?

Consider the recent statement issued by the New Hanover County (North Carolina) Board of Commissioners Chairman Ted Davis, when he explained his vote to turn down a state family planning grant that would cover contraceptive supplies along with other medical services related to family planning.  “If these young women were responsible people and didn’t have sex to begin with, we wouldn’t be in this situation”

Uh, Ted?  Just who do you think these women are having sex with?

The now infamous and extremely ignorant statement by Rush Limbaugh, in which he voiced his opinion that college student Susan Fluke must be a slut because she testified before Congress that she feels birth control is an essential health care inclusion created an uproar across social media sites.  His take on her eloquent speech?  That she wants taxpayers to ‘pay her to have sex.’  He and a host of other conservative political pundits and lawmakers seem to feel our government shouldn’t require insurance companies to include contraception as a part of health coverage. Their argument?  It is too expensive, and the taxpayers shouldn’t have to pay for it.

So, along those lines, let’s explore the actual costs of contraception vs. the cost of pregnancy, delivery and raising a child.

According to Planned Parenthood, the average yearly cost of the Birth Control Pill is between $150- $600.  Condoms (used twice per week on average) cost approximately $150 per year.

Web M.D. reports that the estimated cost of delivery alone is $6,000 – $8,000 for a low risk pregnancy; the cost increases exponentially if it is high risk. Prenatal care averages $2,000.

A couple using no birth control has an 85 percent chance of becoming pregnant in one year. The USDA estimates that on average, middle-income couples spend around $12,500 per year, per child.  Over an 18 year period, this adds up to $225,000.

The argument that contraceptive coverage is ‘too expensive’ just doesn’t hold water.  What is too expensive for our society is having unplanned and unwanted pregnancies, children who are raised on welfare or in foster homes, some of whom later become a further economic burden to society by committing crimes and even ending up in prison.

Who do these members of Congress and the conservative media think will cover the cost for that?

Frederika Zylstra is a professional copywriter with The Written Word Professional Copywriting, and is the Word Wizard for Wild Women for Business.  One of her many hats is writing blogs for business and non-profits. 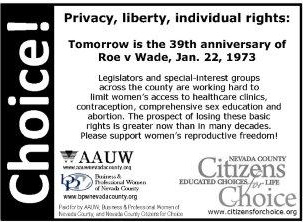 January is the month when we look back at the old year and into the new. So far 2012 with its news coverage in which a woman’s right to choose has been constantly discussed feels like the very difficult 2011 all over again. Last year  the House held more anti-choice votes than in any year since 2000 and states discussed over 160 new provisions related to reproductive health and rights.  A number of radical  anti-choicers aren’t just opposed to abortion but to birth control and comprehensive sex education, too!

Three topics—insurance coverage of abortion, restriction of abortion after a specific point in gestation and ultrasound requirements—are topping the agenda in several states. “Fully 49% of these new laws seek to restrict access to abortion services, a sharp increase from 2010, when 26% of new laws restricted abortion. The 80 abortion restrictions enacted this year are more than double the previous record of 34 abortion restrictions enacted in 2005—and more than triple the 23 enacted in 2010. All of these new provisions were enacted in just nineteen states.”(Guttmacher Institute)

It’s distressing for me to envision voters in many states enthusiastically listening to speeches calling for the overturning of Roe v Wade. What’s the likely scenario going forward? Will the crowds get even bigger and be more in favor of limiting choice or health care options for women? Will that ideological agenda expand and put reproductive freedom in even greater jeopardy? As supporters of choice and womens’ rights we’ll need to be ever stronger in our dedication to protecting Roe and access to health care.

We must never go back!  We have to remember the impact of the Roe decision. “In disallowing many state and federal restrictions on abortion in the United States,the 1973  Roe v. Wade decision prompted a national debate that continues today, about issues including whether and to what extent abortion should be legal, who should decide the legality of abortion, what methods the Supreme Court should use in constitutional adjudication, and what the role should be of religious and moral views in the political sphere. Roe v. Wade reshaped national politics, dividing much of the United States ,while activating grassroots movements on both sides.” (Wikipedia)

Grassroots means you and me and the determined men and women who understand the current threat to reproductive freedom   As many as 12 states are now pursuing personhood initiatives, even after the unexpected defeat of a personhood amendment in Mississippi. There are two personhood initiatives now collecting signatures in California.

No matter what anti-choice extremists try to do, we are counting on you to resist, be more outspoken, informed, and active.  You are the strength of our pro-woman, pro-family and pro-reproductive healthcare movement. Join with Citizens for Choice to educate, inform, and advocate for choice, healthcare access and comprehensive sex education in 2012!